Humpday Hint: 10 Facts About Diabetes from the WHO

This is just a brief list of facts you should know about diabetes, from the World Health Organisation. 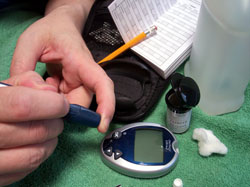