Sunday is May Day, aka International Workers' Day

If you live in the United States, you may be forgiven for assuming that International Worker's Day or May Day is a holiday observed in state communist countries. Here's a fact for you: it did not originate in Cuba or the former Soviet Union. May Day actually has its origins in the United States. 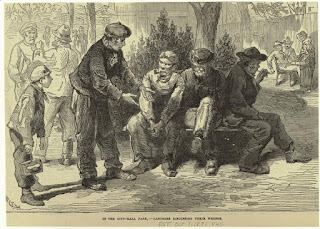 The late 19th century saw workers struggling in very difficult, frequently unsafe, working environments, often for 10 to 16 hours a day. Workers began to push for a shorter workday without any cut in pay. In 1884, organised labour issued a proclamation declaring the 8-hour workday that was to go into effect from May 1, 1886.

More than 250,000 workers in the Chicago area were involved in peaceful protests, with several labour organisations, such as the Trades and Labor Assembly, the Socialistic Labor Party and the local Knights of Labor. Public opinion and the clearly expressed sentiment from the workers included strikes. Nearly 100,000 US workers walked off their jobs on the first of May 1886. It is important to note that up until May 3, 1886, all protests had been peaceful, but then violence broke out at the McCormick Reaper Works between picketing steelworkers and police, when the latter, with the help of Pinkerton agents, harassed and beat the strikers. Beatings from police clubs were answered with rocks thrown by the strikers, to which the police responded with gunfire. At least two strikers were killed, and some others wounded. 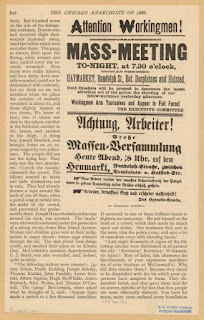 Angered, a group of leaders called a public meeting in Haymarket Square to discuss the police brutality, attended by only about 3000 people due to inclement weather. The Mayor of the city said it was a peaceful gathering, and the speaker, August Spies, did not try to incite violence toward anyone.

Unfortunately, two detectives went to the police and reported a speaker using "inflammatory" language, and the police went to send home the already dispersing crowd. An unknown person threw a bomb into the police ranks, and the police responded by firing into the crowd. An estimated seven or eight civilians were killed, up to forty wounded, and among the police one officer died on site with another seven dying in the ensuing weeks. Big business and government conducted what some call the first "Red Scare" in the US, aided by mainstream media, portraying the anarchists in a negative light.

Eight anarchists were arrested and, in a gross mockery of justice, in a trial with a jury comprised of business leaders, they were convicted of murder, even though only three of those anarchists had been present at what is now known as the Haymarket Massacre. All were innocent but the world saw these eight individuals convicted, not for actions but for political and social beliefs. Two were hung in November of 1887, but six years later, the remaining six anarchists were pardoned by the state governor, who railed against the travesty of justice committed against these people.

Why are we telling this story? This is not only a story of the birth of International Workers' Day. The roots of the pursuit of social justice are found here. The eight-hour workday, the weekend, improvements in working conditions, and eventually the growth of the civil rights movements all came from this. The rights we enjoy across the world today should not be taken for granted, and there is still much more to do. Let’s not forget the sacrifices of these men, women, and yes, children, in the quest for civil rights in all of society.

Email ThisBlogThis!Share to TwitterShare to FacebookShare to Pinterest
Labels: Education