20 of the Most Powerful Heart Foods on the Planet

Or, What Should You Eat After a Century of Processed Food?

A vintage joke goes: An old man in a supermarket asks for help from one of the assistants. The assistant says, "Sir, at your age you will no doubt want all the freshest and healthiest foods." The old man answers: "Forget the health food. At my age, I need all the preservatives I can get." The joke might generate a laugh, but not that long ago, the idea of preservatives, additives and chemicals in food created much less alarm than it does today. The 1900s to 1990s was a century of incredible advancements in food processing and automation, and the consumer was the focus of a food modification industry without par in human history. The first flour bleaching agent was developed in the 1900s. Trans fats were marketed in the 1910s. Brine injection and rapid freezing technologies emerged in the 1930s. Meat preservatives, vegetable freeze drying and flour additives or 'improvers' were developed in the following decade.1 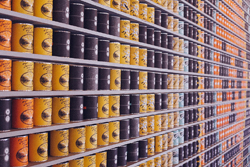 Processed Food Mania
From the 1950s onwards, the processed food industry went into overdrive: all manner of canned, instant, frozen and pre-cooked foods flooded supermarkets, accompanied with a boom in television food commercials targeting the postwar housewife.2 These ad campaigns "made processed foods seem better than fresh ones."3 The 1950s to 1990s were a time of food processing and preservation technologies designed to take the stress, labour and mess away from the preparation of food, thereby specifically appealing to the homemaker who made the family's food choices.


Packaged Heart Disease
The end of the 20th century, however, also witnessed increasing consumer concern over the safety of food technologies and the environment.4 There was mounting evidence about the dangers of saturated fats, trans fats, processed foods, refined sugar and bleached flours. By the 21st century, in the United States, "chronic illnesses and health problems either wholly or partially attributable to diet represent[ed] by far the most serious threat to public health."5 These so-called 'diseases of civilisation' included obesity, cardiovascular disease, hypertension, diabetes and cancer, with an estimated one-third of all cancer deaths attributed to nutritional factors, including obesity.6 According to the World Health Organisation, cardiovascular disease is now the leading cause of death for men and women globally.7


Back to Green
Today, the appeal of processed and modified foods has diminished. Mounting evidence of the negative effect of processed foods is encouraging growing numbers of food manufacturers to reduce salt, sugar and fat in their products. Saturated fats and trans fats are now recognised to increase cardiovascular disease risk, as does highly processed foods. As cardiologist Arthur Agatston points out, "In traditional societies, where people don't eat processed foods, heart disease is rare."8 Consumers are beginning to seek out healthier foods, with less processing and fewer additives. After a century of experiencing the most highly processed foodstuffs humans have ever known in history, people are starting to reassess their diets.


Here, then, are 20 of the most powerful foods known to contain benefits for your heart, arteries and health.


The A-List of 20 Heart Healthy Foods 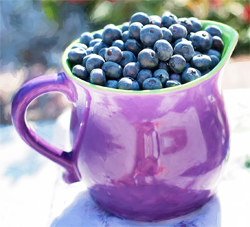 Blueberries top the list as one of the most powerful disease-fighting and cardiovascular-friendly foods. They have been shown to reduce blood pressure and arterial stiffness, and may improve or prevent pathologies associated with the metabolic syndrome, including diabetes and coronary heart disease. They are rich in phytochemicals called polyphenols, which have protective health benefits, and anthocyanins, the antioxidant which gives the fruit its dark blue colour.9,10,11


Seeds and Nuts
Nuts and seeds contain phytosterols, a group of chemicals which have been shown to lower cholesterol levels and reduce the risk of some types of cancer. Among commonly available seeds and nuts, pistachios, sunflower seeds and sesame seeds had the highest levels of phytosterols, followed by pumpkin seeds, pine nuts, almonds, macadamia nuts, black walnuts, pecans, cashews, peanuts and hazelnuts. Many seeds and nuts also contain high levels of oleic acid, a heart-healthy monounsaturated fat.12,13


Olive Oil
Extra virgin olive oil is one of the healthiest of oils to add to your diet. It has high levels of heart-healthy monounsaturated oleic acid, an essential fatty acid proven to have positive effects on cholesterol levels, oxidative stress in the bloodstream, and cardiovascular health.14,15


Sardines
Sardines have some of the highest omega-3 fatty acids levels of any coldwater oily fish. These 'good' fats help raise protective HDL levels, lower harmful triglycerides, and are beneficial to heart and artery health.16


Salads with Olive Oil
Scientists now believe it is the combination of olive oil with salad or vegetables that gives the Mediterranean diet its heart-healthy reputation. The unsaturated fat in olive oil combines with the nitrite in nuts, vegetables and avocado to produce protective, heart-healthy nitro-fatty acids. Nitro-fatty acids lower blood pressure and reduce the risk of heart disease by blocking a potentially dangerous enzyme called epoxide hydrolase.17

Garlic is often called a 'superfood' for its disease-fighting qualities. Research suggests that garlic can help lower LDL levels as well as an enzyme called angiotensin, which constricts blood vessels, and has significant impact on the buildup of plaque in the arteries.18,19,20


Green Tea
Studies have found that green tea helps lower LDL ('bad') cholesterol and triglycerides. It contains powerful antioxidants, including catechins, which are plant phenols which reduce the absorption of cholesterol during digestion, and epigallocatechin gallate, which helps prevent atherosclerosis, the buildup of plaque in the arteries.21,22


Broccoli
Broccoli helps prevent calcification, or hardening of the arteries, and oxidation of LDL cholesterol. It is packed with antioxidants, vitamin K, and heart-healthy fibre which helps to normalise blood pressure and plaque build up in the arteries.23


Oats
Oats is full of viscous fibre, also known as soluble fibre, which helps to lower LDL and total cholesterol. The viscous fibre also encourages a good balance of colonic bacteria. The beta glucans in oats can also help to prevent absorption of cholesterol from food.24,25,26


Oranges
Oranges have been shown by recent research to be a powerful heart food. It contains citrus pectin, which helps neutralise a protein called galectin-3 which causes scarring of heart tissue and eventually leads to congestive heart failure. This condition is often difficult to treat with drugs. In addition, the soluble fibre pectin acts like a sponge, soaking up cholesterol in food and blocking its absorption by the body -- the same effect produced by a class of drugs called bile acid sequestrants.27


Kale
Kale is a heart superfood. It boasts high levels of heart-healthy antioxidants, omega-3 fatty acids, fibre, folate, potassium and vitamin E. It is also rich in lutein, which helps protect against early atherosclerosis. In addition, it contains an unusual compound called glucoraphanin, which activates a protective protein called Nrf2, which, as Eat to Live author Dr Joel Fuhrman describes, "creates a sort of Teflon coating in your arteries to keep plaque from adhering."28 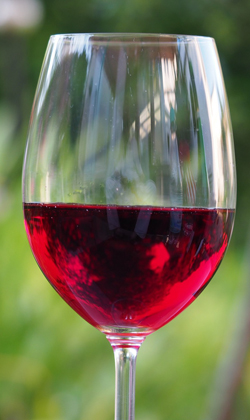 Red wine contains powerful compounds called polyphenols, which help keep blood vessels flexible and reduce the risk of unwanted clotting.29 Also called procyanidins, these polyphenols were found in levels two to four times higher in red wine from Sardinia and the Gers region of the Midi-Pyrenees in south-west France, both areas famous for the longevity of their population.30


Dark Chocolate
The high cocoa content in dark chocolate is a cardiovascular ally. Cocoa is rich in compounds called flavanols, which improve blood vessel flexibility. The Kuna Indians off the coast of Panama consume enormous quantities of minimally processed cocoa. As a result, they have enviably low blood pressure, and unlike most other people, they do not develop hypertension as they age.31


Pomegranates
Scientists have found that pomegranates can significantly reduce oxidative stress in the arterial walls. They are rich in polyphenolic antioxidants, which not only help to block the progression of plaque, but may actually help reverse plaque buildup, by activating an enzyme which breaks down oxidized cholesterol. A recent Israel Institute of Technology study has shown that consuming a combination of pomegranate juice and dates, another cardiovascular ally, produces a combined effect more powerful than either fruit on its own.32,33


Dates
Like pomegranates, dates contain superior cardiovascular benefits. They contain high concentrations of phenolic radical scavenger antioxidants, inhibit the oxidation of LDL ('bad') cholesterol and stimulate the removal of cholesterol from lipid-laden arterial cells. In a recent Israel Institute of Technology study, scientists found that a combination of dates and pomegranate juice reduced oxidative stress in the arterial wall by 33% and decreased arterial cholesterol content by 28%.34


Avocado
Studies have shown that daily consumption of avocado can decrease triglycerides and LDL ('bad') cholesterol by up to 22%, and increase HDL ('good') cholesterol by up to 11%.35 With the highest levels of healthy unsaturated fat of any fruit apart from coconut, avocados are a nutrient-dense food, with approximately 4 grams of protein and 11 grams of fibre per avocado, and nearly 20 vitamins and minerals.36,37 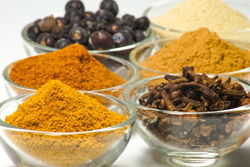 Research has shown that eating spices such as turmeric, paprika, rosemary, oregano, cinnamon, black pepper, cloves and garlic powder with your meals can lower triglyceride levels by up to 30%. The high antioxidant levels of spices help mitigate oxidative stress, which has been linked to heart disease, arthritis and diabetes.38,39


Soy Protein
Soy protein, made from soy beans, has numerous benefits for the cardiovascular system. It is a quality plant protein which contains fibre, vitamins, minerals and healthy polyunsaturated fats, which help lower triglycerides.41

20Is Garlic good for you? 7 surprising benefits of garlic for optimal health, Lizette Borreli, Medical Daily

227 Teas that can help or harm your heart, Debbie Strong, Everyday Health

33Pomegranate and Dates for Life, Israel Institute of Technology

34Pomegranate and Dates for Life, Israel Institute of Technology

Effect of a dietary portfolio of cholesterol-lowering foods given at 2 levels of intensity of dietary advice on serum lipids in hyperlipidemia, David JA Jenkins, et al, Journal of the American Medical Association