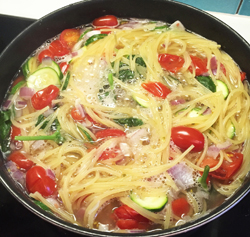 This discovery took place in 2014 on the BBC television series of Trust Me, I'm A Doctor (TMIAD), a factual programme which focuses on examining the evidence behind health claims made in the media with the help of a team comprising a medical journalist, two doctors and a surgeon.1 With the help of researcher Dr Denise Robertson from the University of Surrey, TMIAD's experiment with a hitherto unknown effect of 'resistant starch' produced what team member Dr Chris van Tulleken called "a brand new discovery... something that could simply and easily improve health. We can convert a carb-loaded meal into a more healthy fibre-loaded one instead without changing a single ingredient, just the temperature. In other words our leftovers could be healthier for us than the original meal."2


So what did they discover? Science already knew about 'resistant starch' - the phenomenon where starch in cooked and chilled carbohydrates such as potatoes and pasta becomes harder to digest, thereby releasing less sugar into the bloodstream.3 But TMIAD found that if you chilled freshly cooked pasta, and reheated it AGAIN before consumption, the resistant starch converted to a form of 'super' resistant starch which strongly resisted digestion by stomach enzymes, allowing it to enter the lower intestines as fibre.4,5,6 This not only dropped unhealthy blood glucose spikes by 50% when compared to an equivalent meal of freshly cooked pasta, but, just as importantly, provided the right kind of fuel for the microbes of the lower intestine to use.7,8 According to medical journalist Michael Mosley, this discovery of a second level of transformation from 'resistant starch' in chilled pasta, to an "even more 'resistant starch'" by reheating the chilled pasta, was "an extraordinary result and one never measured before."9 Diabetes UK is now funding Dr Robertson's continued research on the effects of resistant starch.10

Discovery #2: The Secret Behind the Mediterranean Diet 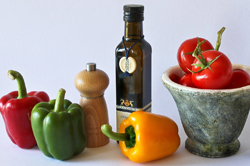 A British Heart Foundation-supported study says the secret to the Mediterranean diet's famed heart-healthy powers is the combined effect of olive oil and vegetables. Led by King's College London, the 2014 study found that combining unsaturated fats such as olive oil with nitrite-rich vegetables produces an effect which lowers blood pressure.11 When these two food groups are combined, the unsaturated fatty acids react with nitrogen compounds in the vegetables to form nitro fatty acids, which in turn inhibit an enzyme called soluble Epoxide Hydrolase which regulates blood pressure. When the action of the enzyme is blocked, blood pressure falls.12,13,14 Professor of Cardiovascular Biochemistry at King's College London Philip Eaton states: "The findings of our study help to explain why previous research has shown that a Mediterranean diet supplemented with extra-virgin olive oil or nuts can reduce the incidence of cardiovascular problems like stroke, heart failure and heart attacks."15 The traditional Mediterranean diet typically describes a Greek, Spanish and Italian-inspired diet plentiful in vegetables, fresh fruit, whole grains and nuts, bread, eggs, fish and poultry, usually cooked with or eaten together with olive oil. While the various components of the diet have obvious individual benefits, researchers have long been interested in what made the diet so healthy as a whole. Professor Eaton noted that while the study was conducted on mice, "[H]umans have this same enzyme so we think the same happens in people." It would explain why the Mediterranean diet is healthy, even though it contains fat, Professor Eaton said.16 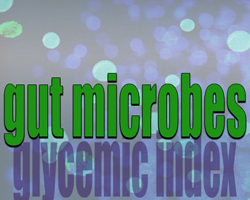 A November 2015 study by the Weizmann Institute of Science has called into question conventional understandings of the glycemic index, blood sugar responses to foods and standard dietary recommendations. The findings, published in the highly respected journal Cell, show that individual blood sugar responses to the same food vary dramatically, which could explain why some people are unable to lose weight and others stay slim, even if they eat the exact same foods.17,18


Conventionally, physicians and nutritionists rely on the glycemic index (GI), a numbered rating of the relative abilities of carbohydrate foods to increase the level of glucose in the blood, to suggest dietary plans for individual health needs. Carbohydrate foods which are quickly digested by the body and produce a rapid increase in blood glucose have a high GI rating, while medium or low GI foods are broken down more slowly and cause a gradual rise in blood sugar levels over a longer period of time. High GI foods include sugar and sugary foods and soft drinks, white bread, potatoes and white rice. Low or medium GI foods include whole grains, beans and lentils, and many vegetables and some fruits.19


What the Weizmann Institute study found was that the GI numerical indicator was a poor predictor of the actual response of many people to the stated foods, and that the bodily response to all foods was highly individual.20,21 The study, which included the analysis of gut microbes (collectively known as the microbiome) from the subjects, suggests these individual glycemic responses resulted from each person's unique microbiome, which plays an extremely important role in human health and disease.22 Immunologist Dr Eran Elinav says: "It is a very young field, because we just realised in the last few years, that our microbes that live within us from the moment we are born, are extremely important in almost every aspect of our being. And the deeper we sequence, the deeper we characterise our gut microbes, we find that each one of us is unique in our microbiome composition, and our microbial function. We now understand that our microbes are an integral part of our body, even a neglected organ."23


HEALTH TIP: Eat a wide variety of fibre to increase the diversity and health of your gut microbiome.