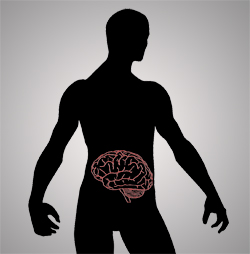 All of this begs the question: Why? The gut's requirement for a brain or nervous system of its own is suggestive: do we need a 'second brain' simply to manage digestion? Or is something far more sophisticated happening within the digestive tract? Recent studies indicate that your gut microbes, or microbiota, play an extremely important role in the body's health, far more than was previously thought.2,3,4 Stanford microbiologists Justin and Erica Sonnenburg believe there is a direct link between the health of the body's ecosystem of intestinal microbial organisms, and many Western diseases such as irritable bowel syndrome, obesity, diabetes, and immune system problems such as allergies or food sensitivities.5 The root of the problem, they believe, is the recently-evolved Western diet -- a diet high in processed foods which lack the abundant and diverse fibre we actually need. With such foods, digestion takes place in the stomach and small intestine, leaving too little fuel for the beneficial microbes in the large intestine to maintain themselves with. This leads to low bacterial diversity in the gut, unbalanced microbe communities, and a system seriously out of whack. The change from traditional high-fibre hunter-gatherer diets to the last 100 years of the most processed and modified foodstuffs ever experienced in human history,6 has contributed to what the Sonnenburgs call a "mass extinction event" of the 100 trillion bacteria, comprised of 1200 different species, required to tune our immune systems and regulate inflammation.7

To reverse this demise, we need to feed our gut plenty of fibre. Specifically, we need polysaccharides, the complex carbohydrates found in plant matter, and we need a wide range, because different microbes require different polysaccharides.8 Research shows that there is a direct correlation between the food we eat, and the species of bacteria which responds: for example, the standard Western diet which is high in protein and fat produces greater proportions of the Bacteroides genus, while a high-carbohydrate, high-fibre diet, encourages higher numbers of Prevotella bacteria.9 The greater the diversity of our intestinal bacteria, the healthier our microbial community, and the better our overall health will be.

So what should we do? Feed our second brain! Eat the following three types of food to encourage a higher diversity and population of the right kinds of bacteria for optimum health.
References
1 The Good Gut: Taking control of your weight, your mood and your long-term health, 'Gut Feelings: The 'Second Brain' in our gastrointestinal systems' [excerpt], Justin Sonnenberg & Erica Sonnenberg.

2 The Good Gut: Taking control of your weight, your mood and your long-term health, 'Gut Feelings: The 'Second Brain' in our gastrointestinal systems' [excerpt], Justin Sonnenberg & Erica Sonnenberg.

5 Cute Family. And you should see their bacteria, New York Magazine, John Swansburg.

7 Cute Family. And you should see their bacteria, New York Magazine, John Swansburg.

8 Cute Family. And you should see their bacteria, New York Magazine, John Swansburg.

9 Eat these 3 foods for a healthy gut, Johannah Sakimura.

10 Eat these 3 foods for a healthy gut, Johannah Sakimura.

11 Eat these 3 foods for a healthy gut, Johannah Sakimura.

12 Eat these 3 foods for a healthy gut, Johannah Sakimura.