"Just when the caterpillar thought
the world was over,
she became a butterfly."

From "Ladies of the Borobudur" by Barbara Haines Howett 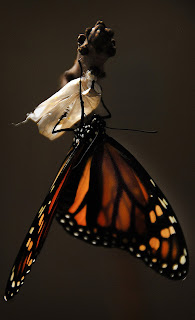 Initially, any change you make will feel uncomfortable, perhaps even unnatural. You can overcome this discomfort by focusing on small steps, keeping a positive attitude, and reaffirming your commitment to change.

Divide long term goals into small, doable actions. You don’t need to make an entire life change all at once. Remind yourself that changing even small behaviors can help you reach your goals, if you stick to them long enough for them to become new, healthier habits.

Added note: It is said if you stay with a new habit for 30 days, it's an established habit. Resolve to stick to that new, positive lifestyle change and it will simply become part of your life.

Caring for a Thermos Bottle 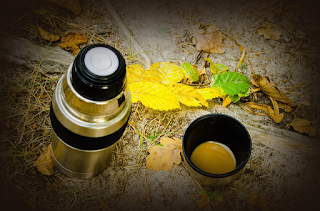 Did you know that February 26 is Thermos Bottle Day? What is a Thermos® bottle? It’s a brand name of an insulated storage bottle also known as a vacuum flask. The space between the outer and inner metal bottles is a partial vacuum, created by removing the air. This gap stops heat transfer between the outside and inside containers. If a hot liquid is put inside, it stays hot; it a cold liquid is put inside, it stays cold.

When you first get a new vacuum flask, clean it carefully with warm water and dish soap. Remember, the flask is fragile, so avoid bumping it. You will clean it the same way, with warm water and dish soap, after each use. Do NOT immerse in water or put in a dishwasher. Let the flask drain upside down, then dry it carefully and thoroughly. Store your flask with the stopper off.

Always use the cup when drinking hot liquids from the flask. You should never use the flask to transport baby foods or milk products as these can spoil.

If you care for your vacuum flask properly, it will give you years of hot cocoa and iced tea when you are on long car trips or picnics.

Three new studies suggest that the fate of our health is not bound irrevocably to our genetic makeup. Genetic risk has generally been viewed as unavoidable. But research is now discovering that lifestyle choices and diet can mitigate even high-risk gene variants, affect an organism's DNA gene sequence, and reduce age-related disease risk.

1 A study led by Massachusetts General Hospital investigators has found that even among people with high genetic risk of heart disease, a healthy lifestyle can cut the probability of a heart attack or similar event in half. Published in the New England Journal of Medicine on November 15, 2016, the findings will be presented at the American Heart Association (AHA) Scientific Sessions. 'The basic message of our study is that DNA is not destiny,' says Sekar Kathiresan, MD, director of the Center for Human Genetic Research at Massachusetts General Hospital. The research team analysed genetic and clinical data from more than 55,000 participants in 4 large-scale studies. Participants were assigned a genetic risk score based on whether they carried any of 50 gene variants associated with elevated heart attack risk. Four AHA defined lifestyle factors -- no current smoking, lack of obesity, physical exercise at least once a week, and a healthy dietary pattern -- were used to measure participants' level of lifestyle health. Researchers found that the presence of each healthy lifestyle factor reduced risk, and the presence of an overall favourable lifestyle could reduce the incidence of coronary events by 50 percent in participants with the highest genetic risk scores.

2 Researchers from the University of Montreal have found that the makeup of a person's intestinal bacteria ecology (microbiome) -- an ecology largely determined by choice of diet -- may play an important role in determining if they will develop age-related macular degeneration (AMD) . AMD is the leading cause of irreversible blindness in the industrialised world, and is characterised by a heightened immune response, large deposits of fat debris at the back of the eye (early AMD), destruction of nerve cells, and growth of new diseased blood vessels (late form, wet AMD). Until now, data has suggested that smoking and abdominal obesity (in men) were risk factors for AMD. The researchers found that changes in the bacterial communities of the gut, such as those brought on by a diet rich in fat, cause long-term low-grade inflammation in the whole body and promote diseases such as wet AMD. 'Our study suggests that diets rich in fat alter the gut microbiome in a way that aggravates wet AMD, a vascular disease of the aging eye. Influencing the types of microbes that reside in your gut either through diet or by other means may thus affect the chances of developing AMD and progression of this blinding disease,' says Dr Przemyslaw Sapieha, a researcher in the November 15, 2016 study.

3 We are what we eat, goes the old saying. Now researchers at the University of Oxford have demonstrated that the diets of organisms can affect the DNA sequences of their genes, by studying groups of eukaryotic parasites and bacterial parasites that infect different plant or animal hosts. Dr Steven Kelly, from Oxford's Department of Plant Sciences, says: 'Organisms construct their DNA using building blocks they get from food. Our hypothesis was that the composition of this food could alter an organism's DNA. For example, could a vegetarian panda have predictable genetic differences from a meat-eating polar bear? To test this hypothesis, we picked simple groups of parasites to use as a model system. These parasites share a common ancestor but have evolved to infect different hosts and eat very different foods. We found that different levels of nitrogen in a parasite's diet contributed to changes in its DNA. Specifically, parasites with low-nitrogen, high-sugar diets had DNA sequences that used less nitrogen than parasites with nitrogen-rich, high-protein diets.' Doctoral candidate Emily Seward, from the same department, says: 'It has been unclear why very closely related organisms can look so different in their genetic makeup. So many factors...can influence the DNA sequence of an organism. But our study explains a very high percentage of these differences and provides evidence that we really are what we eat.'

Please consider participating in a research study. Some require you to visit a local facility, others are conducted as online surveys or focus groups. Some research offers a cash stipend for participating, or free medical treatment.

All research adds to the body of knowledge that benefits us as persons with disabilities.

Visit the Research Pavilion on Healthinfo Island in Second Life®. Click on a poster to receive information about a research study.

If you are new to Second Life, you can create a free account. Start here and after you have downloaded and installed the Second Life Viewer, then entered Second Life for the first time, you can visit the displays. To do this, click on the "Research Pavilion on Healthinfo Island" link above, then click the "Visit this location" button on the map in the page that comes up.

In Second Life®, Virtual Ability owns several islands. One of them is Healthinfo Island, which is home to a number of exhibits about a variety of topics. Do visit these very informative and enlightening displays. Thanks to Mook Wheeler, a member of the Virtual Ability community, they are updated on a monthly basis.

If you are new to Second Life, you can create a free account. Start here and after you have downloaded and installed the Second Life Viewer, then entered Second Life for the first time, you can visit the displays. To do this, click one of the links below, then click the "Visit this location" button.

While there, Click the title poster of the exhibit or display to get a full text notecard. Click each poster for live links and text chat.


Other exhibits and displays on Healthinfo Island during February:

And of course, February is Heart Health Month, so check out the exhibits to learn about: